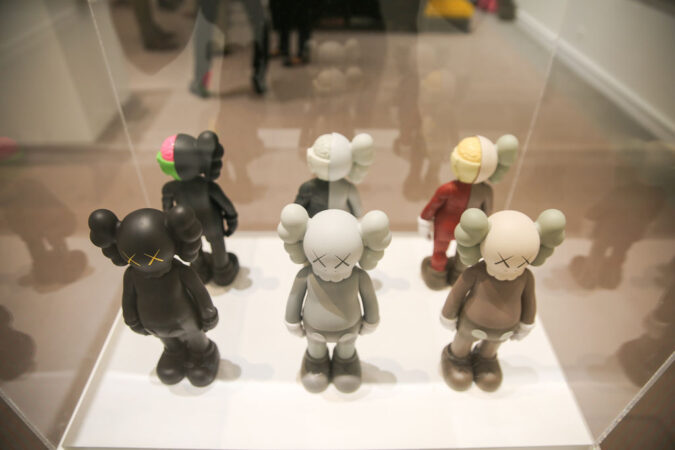 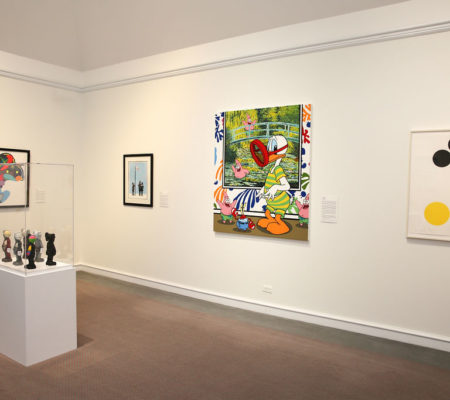 KAWS’s work is a blend of illustration, pop culture, and contemporary art. He has a particular interest in mass media, fashion and commercial products, and has designed toys and clothing for well-known companies such as Original Fake, Undercover, Nike, Vans, and Comme des Garcons.

In  2006, KAWS partnered with toy company Medicom Toy (Makers of Bearbricks) to open his own store called OriginalFake. Within that collaboration, he released his most iconic figure, the KAWS “Companion.” A simple figure with a Mickey Mouse-like body and his traditional skull head with X’d eyes. These were not by any means Toys, they were very limited, extremely detailed and are now in art galleries and private collections around the world. These sculptures were only several inches tall, but the artist moved on to create different sizes with different materials like fiberglass. This allowed him to create huge versions of the “Companion” sculptures that are over 32 feet high! One can be seen in the grounds of the Hamilton Princess in Bermuda as a part of the Green Family Collection.

However, many of KAWS’s “Companions” are considerably more accessible, such as his these vinyl toys produced in collaboration Medicom. He created his first vinyl toy in 1999: an eight-inch “Companion” with his signature style round belly, noodly limbs, and white gloves.  The limited edition toy, produced in collaboration with the Japanese brand Bounty Hunter, reflects KAWS’s desire to make his work more accessible to the public. In the years since, KAWS has rendered most of his signature characters in three dimensions, including like Tweety, Snoopy, and Pinocchio. When first released, these sculptures often sell out in just seconds. When the Museum of Modern Art promoted KAWS’s toys in its design store, collector demand was so high that the museum’s website crashed multiple times.