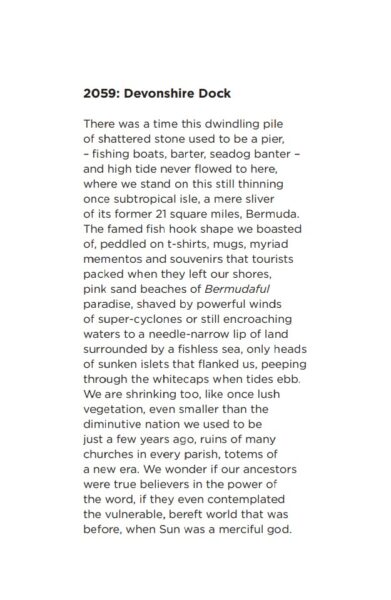 Alan C. Smith is a visual artist and writer. His visual art is usually manipulated digital photography, drawing and video, often featuring text and performance. His written work has been published in the award winning Under the Moon and Over the Sea: A Collection of Caribbean Poems, Poems from a Green & Blue Planet, POUI, Caribbean Writer, tongues of the ocean and several other online and print publications.

In 2019, the A3 Press published his chapbook, 30 Days w/o. His visual work has appeared in seven Bermuda Biennials and been featured in artsmithsbda’s Pawpaw Bermuda and Genre: Urban Arts’ House – Second Edition. For Carifesta Barbados 2017, he was selected to represent Bermuda as both poet and visual artist.

Of his 2022 Bermuda Biennial entry, he says: “I engaged the past and future, both connected to the current era, in an effort to imagine a not so distant future reality, without significant alterations to our present local and global behaviors.”