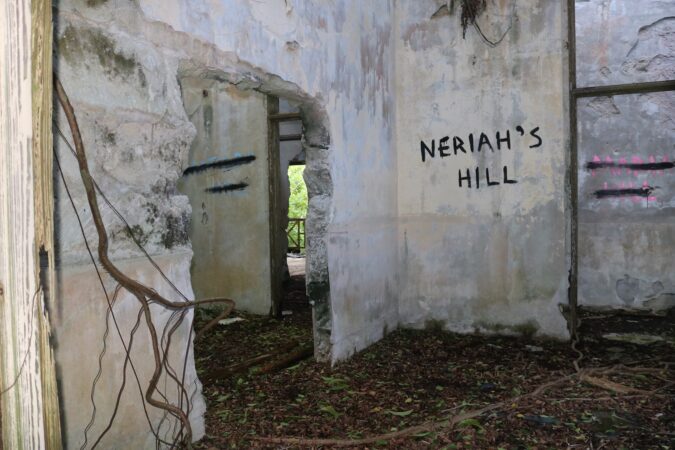 With thanks to the West End Development Cooperation for granting permission to create this site-specific project.

Rachel Simons is an interdisciplinary artist. Her practice is anchored through the reinterpreting of site-specific places, usually abandoned structures, drawing attention to their unique histories.

She says: “Responding site-specifically to a disused military mess in Bermuda, I discovered a complex history with its naming. It was first recorded as Neriah’s Hill, after the 17th century farmer who worked the land. By the early 1600s, a colonial battery was erected by the British Military, and it became known as Maria Hill Fort. The quarried hill was later identified by Captain J. F. Grant in 1886 as a suitable location to house British dock workers deployed to work in Bermuda.

“In contradictory records, the site is referred to by similar names, but Neriah’s name eventually becomes erased. As a British descendent, I acknowledge that my roots originate from the colonising country of this land. Through this work, I make my own personal gesture as a response to these colonial relics.”