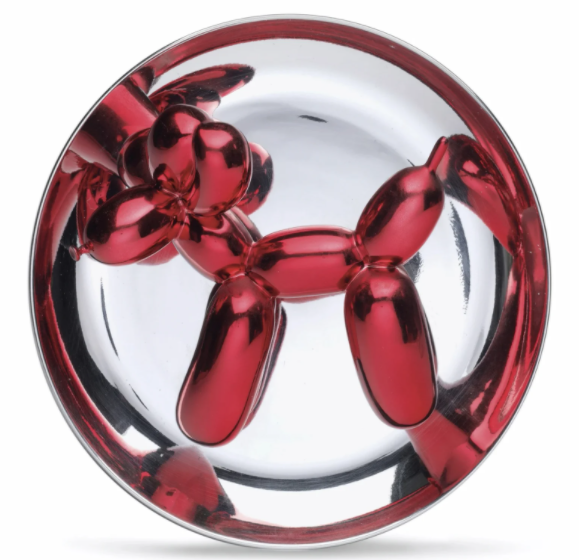 Koons was an early pioneer of appropriation, reproducing banal commercial images and objects with only slight modifications in scale or material. He was a part of the Post –Pop generation of artists who continued to explore the 60’s fascination with popular culture, advertising, and mass media. His work is often referred to as pop art with his his focus on the everyday. Since his first solo exhibition in 1980, his work has evolved from small-scale assemblages of toys and found objects to his now iconic monumental works, including huge balloon animals rendered in mirror-polished stainless steel, as well as flowering topiary sculptures, such as Puppy (1992), which is permanently installed at the Guggenheim Museum Bilboa.

Jeff Koons’ reproduction balloon animals are amongst some of his most recognizable pieces. Usually rendered in a mirror-finished stainless steel in a variety of colours, the works reflect an element of childhood play and disposable culture but in a definitive, substantial form. On display is the Red, Blue and Yellow  Balloon dogs. Koons has collaborated with famed French porcelain company Bernardaud to create miniature Balloon dog Sculptures in each of the original colors. The sculptures come as a limited edition of 2,300 and are mounted on silver-coated plates.

Koons says of the Series “Balloon Dog is a very optimistic piece, it’s a balloon that a clown would have maybe twist for you at a birthday party.  But at the same time there’s the profoundness of an archaic sculpture.  The piece has an interior life while the reflective exterior surface affirms the viewer through their reflection.  The porcelain only accentuates the sexuality of the piece.” Jeff Koons