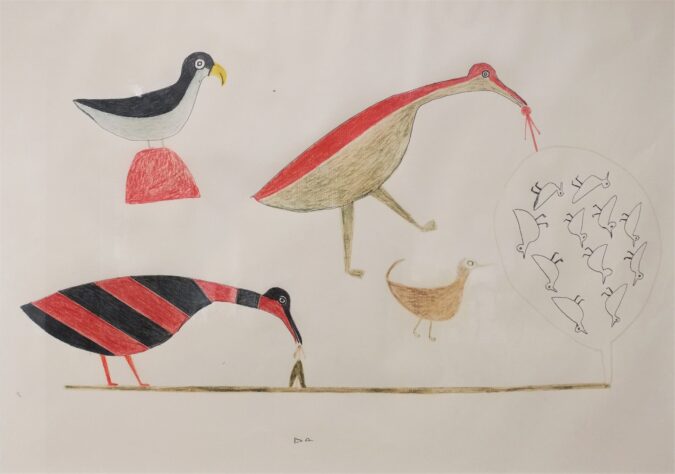 In the 1950s, the Canadian Government established a number of settlements across the Northern Territories in order to both protect Canada’s sovereignty in the Artic and give the Inuit access to education and healthcare services in the wake of a tuberculosis epidemic, and to provide them with new sources of income as revenue from traditional pursuits such as hunting declined with the collapse of the fur trade. This saw many Inuit families move from a traditional semi-nomadic way of living to a sedentary life in which they were forced to adapt to Western ways.

Jessie Oonark (1906 – 1985) shared a traditional nomadic life with her husband until his death in 1958, after which she moved to the Baker Lake settlement in the Kivalliq Region of Nunavut. There, she was introduced to pen and paper for the first time and began making art. In 1959, she became the first adult Inuit artist to be asked to make drawings for sale. Six of Oonark’s early drawings were sent to Cape Dorset and were made into prints, where they were published in the 1960 and 1961 Cape Dorset Graphic Collections.

By the mid-1960s, Oonark had developed a confident style and she began incorporating new media, such as felt tip pen and coloured pencils, into her graphite drawings. Her work, which is celebrated for its bold graphic sense and firm grasp of colour, went on to been featured in over 100 exhibitions, both in Canada and abroad. Oonark was elected into the Royal Academy of Arts in 1975 and was named an Officer of the Order of Canada in 1984.