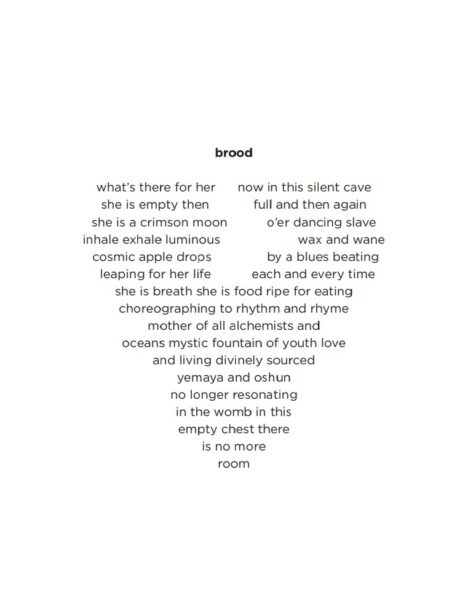 Jessica Lightbourne is a Bermudian writer. A child of the ‘70s and daughter of a white British woman and a black Caribbean man, both educators and creatives, she is fascinated by intersectional identity. She writes about family, love, power and resistance. She co-wrote the 2017 Golden Inkwell winning play, S-D. I. R: Like Biblical Esther, with friends Joy Barnum, Catherine Hay, Amy Murray and Rachel York. A diarist, Jessica has been a closet poet for 28 years.

Of brood, she says: “I was feeling the heart tug as my daughter left for university for the second time. I raised my daughter, an only child, as a single mother. There is a push and pull in mother/daughter relationships. There is a coming and going in the heart and its chambers. My heart races when I think of herso far away from me. I also understand that
she needs to be free. She is my heart. And
she has flown the nest.”