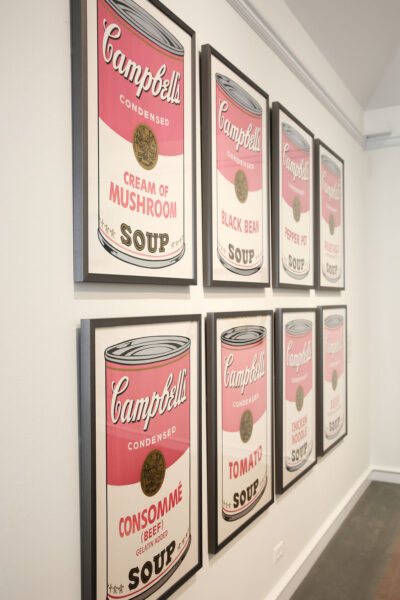 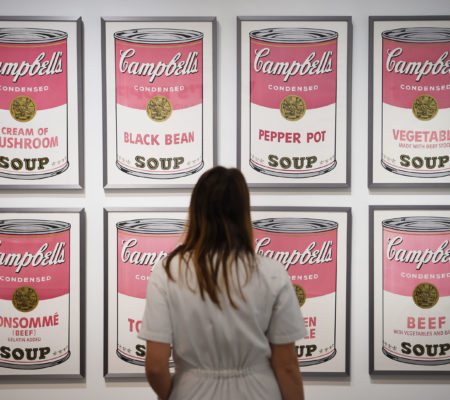 American artist Andy Warhol was a leading figure in the Pop Art movement. A Graduate of the Carnegie Institute of Technology in 1949, he moved to New York City where he gained success as a commercial artist. He got a job working for Glamour magazine and went on to become one of the most commercial artists of the 1950’s, during which time he started to explore painting.  By 1960 he became focused on the pop art movement, exploring the connection between celebrity culture and artistic expression.

This artwork of Campbells soup cans is synonymous of the pop art moment and represents the mass produced products that inspired Warhol. At the time there were 32 soup varieties; in 1962 Warhol originally created a painting of each variety, with the name of each flavor being the only difference. He said of Campbell’s soup, “I used to drink it. I used to have the same lunch every day, for 20 years, I guess, the same thing over and over again.” This concept of taking the everyday object and presenting it as a work of art continues to influence artists today.

Toward the end of 1962, Warhol began to experiment with the photo-silkscreen process, a printmaking technique that was originally invented for commercial use. Warhol would take a mass media photographic image and transfer it onto a silk screen, then using a squeegee he would push ink through the screen and could duplicate the images onto canvas or paper with slight variations.  Warhol found this commercial process interesting as it allowed him to easily reproduce images that he appropriated from popular culture.

In 1968 he created two series of prints of the Campbells soup cans. The 32 prints were displayed in the same manner that Campbells soup was displayed on the shelf at the supermarket, and in no particular sequence.  Silkscreen became his signature medium as it aligned with his philosophy, “I don’t think art should be only for the select few,” he claimed, “I think it should be for the mass of the American people.”