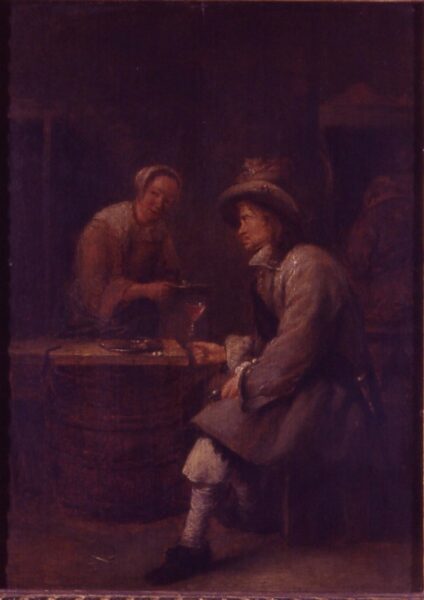 This painting is attributed to Pieter de Hooch, a leading figure of Dutch Golden Age painting and a contemporary of Johannes Vermeer. The son of a master bricklayer, De Hooch was born in Amsterdam and studied under landscape painter Nicolaes Berchem in Haarlem. In 1655, the year that this work is believed to have been painted, he entered the guild of St Luke in Delft as an independent painter, where he studied under guild painter and Rembrandt disciples Carel Fabritius and Nicolaes Maes.

Cavalier with Wine Glass is an example of De Hooch’s early paintings, known as koortegardje, which captured tavern interiors in shades of dark browns and yellows. He settled in Amsterdam in 1660 where he developed his later works, known as kamergezichten, which depicted interior and courtyard scenes of domestic life and focused on the effect of light. The last work attributed to De Hooch is dated 1684 and he is believed to have died shortly afterwards.