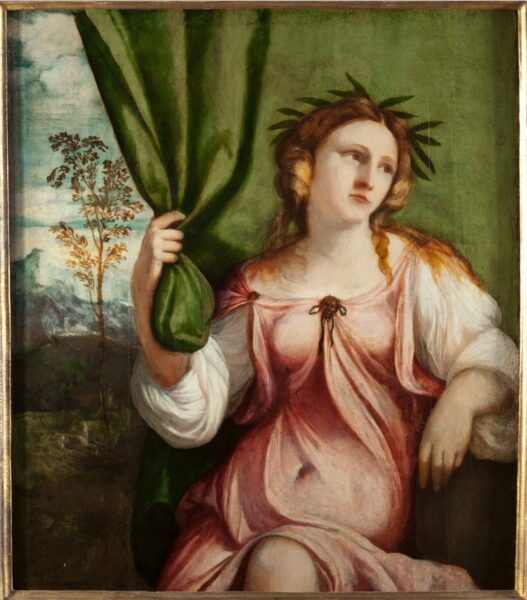 Palma produced strong and broad rather than graceful works, famous for their sensual appeal and limpid, transparent colouring. He is chiefly remembered for his portraits of a particularly splendid and voluptuous type of blonde-haired woman, considered to be characteristically Venetian because of her opulence, sensuality and beauty.

This portrait is thought to represent the allegorical figure of Chastity. Typically, Palma chose to paint Chastity as a curvaceous blonde, with very pale and luminous skin. The whiteness of both her flesh and the sleeves of her robe suggest her purity. Chastity clutches the green velvet curtain that frames her, and leans against a parapet. Both of these gestures are symbolic of her steadfastness.

A white animal, thought to be a unicorn, can just be made out in the background landscape. According to the biblical book of Genesis, the unicorn was the first beast to be seen and named by Adam in the Garden of Eden. When Adam and Eve were expelled from paradise, the unicorn went with them, and thus became an earthly symbol of purity and chastity.