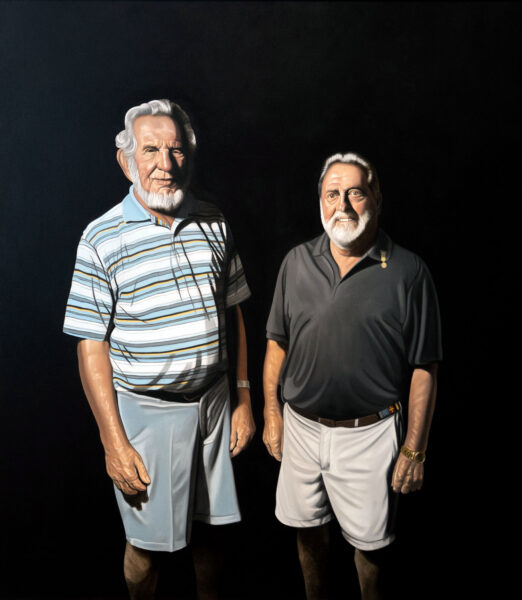 Danny and Johnny captures Dennis E. Fagundo and John D. Pereira, the founding directors of D&J Construction. In 1967, these two independent contractors came together to form D&J and build the company into one of Bermuda’s largest construction firms.

From the humble origins of immigrant Azorean families, Danny and Johnny became leading figures in both the Portuguese community and Bermuda’s business community. Their business legacy includes the many buildings that define Hamilton’s skyline built by twin companies D&J Construction and D&J Excavation. Their community legacy includes many acts of philanthropy including scholarships, support of local charities, and in particular their commitment to honor and support the Portuguese community and culture. They were both recognized in 2007 with a Queen’s certificate for contributions to the construction industry.

The first Portuguese arrived in Bermuda in the 19th century as part of a network of farming labourers brought in from Madeira and the Azores. A volcanic archipelago situated 1,000 miles off the coast of Portugal, the Azores shares many traits with Bermuda, including similar vegetation. It is estimated that today up to 25% of the Bermuda population can trace Portuguese heritage. The Portuguese community have enriched many facets of life in Bermuda, with strong presence in all areas.