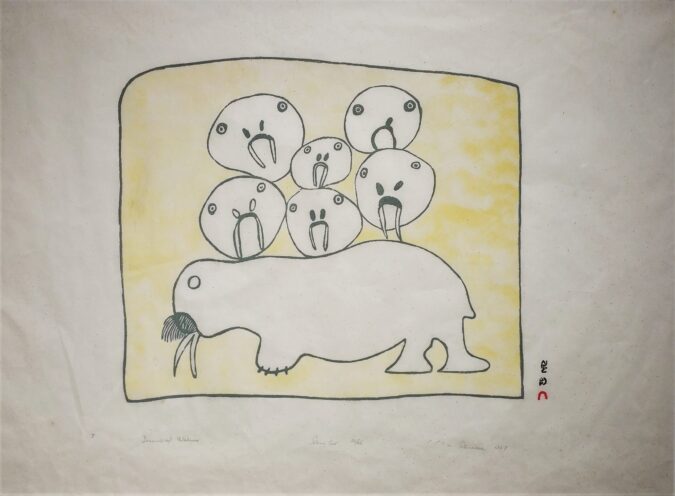 Both a food source and material for clothes and shelter, the mammals and marine life of the Artic play a prominent role in the daily lives of the Inuit which is reflected in their art: with seals, bears and walruses amongst the most represented.

In Walrus and Bear, Pitseolak Ashoona captures the respect held by the Inuit for the polar bear. A hunter, much like the Inuit themselves, the polar bear is regarded as a competitor for game and is revered for its intelligence, strength, and agility in surviving in such extreme conditions.

Ashoona’s work focuses on the traditional way of life of the Inuit: “the things we did long ago before there were many white men,” as she once described it. She grew up in the traditional, semi-nomadic way of life before moving to Cape Dorset in the mid-1940s, after the death of her husband, having borne him 17 children, only 6 of whom surviving into adulthood.

Unusually for an Inuit widow, Ashoona chose not to remarry and instead enrolled in the Cape Dorset Print Programme which allowed her to earn a living as an artist. The works shown here were produced in the 1960s, a time that she spent learning to draw and master her craft: these pieces are early examples of her signature style which is characterized by clean line drawings and intense colour.

Ashoona went on to produce more than 7,000 drawings in her lifetime. In 1974, she was inducted into the Canadian Royal Academy of Fine Art. A retrospective of her drawings from 1962-1974 was organized by the Department of Indian Affairs and Northern Development, which toured multiple locations across Canada and the United States, including the National Gallery of Canada and the Smithsonian Institution in Washington, DC. In 1977, she was inducted into the Order of Canada.

Ashoona’s granddaughter, Annie Pootoogook (1969-2016), went one to become one of Canada’s most esteemed contemporary artists. Renowned for her depictions of contemporary Inuit life, Pootoogook won the Sobey Award in 2006 and exhibited in both Art Basel (2007) and Documenta 12, a contemporary art exhibition in Germany (2007).