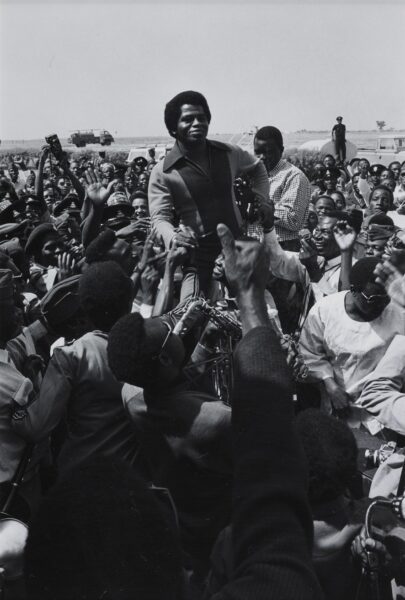 Here, Saunders captures the sheer exuberance of the crowds greeting the King of Soul as he touches down in Nigeria for the first time, with the picture centred around both Brown, who glides across their shoulders, and the man in the foreground playing the saxophone to him as people frantically jostle around them.

James Brown arrived in Nigeria at the end of 1970, a year which had seen both the release of Get Up (I Feel Like Being A) Sex Machine, one of the first songs recorded with his new band the JB’s, and the end of Civil War in the host country (1967-1970).

“In those days Africa was just beginning to develop,” explained Saunders. “When I first went in, it can’t have been more than ten years after the first independent African nation had come into being. It was an exciting period – you could actually see the changes occurring from one month to the next.”