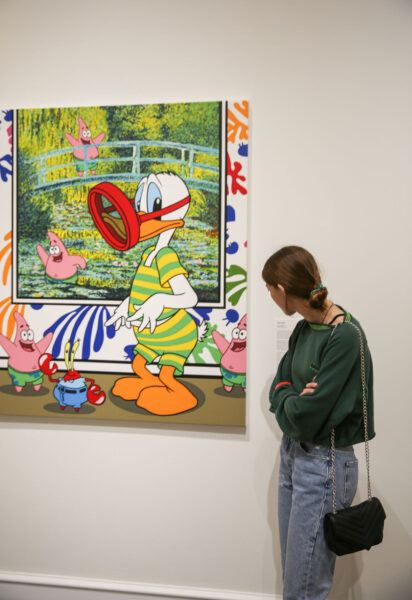 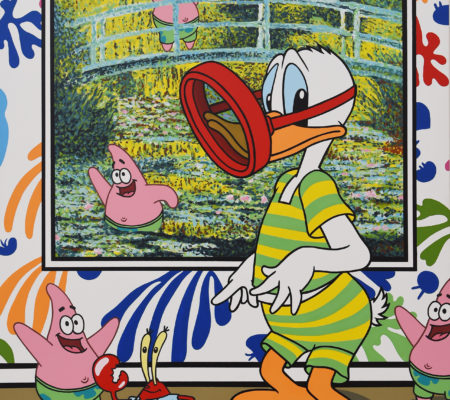 Olivier Rizzo, known under his artist name Speedy Graphito, is one of forerunners of the French Street art movement. His influences have been artists like Magritte, Lichtenstein, and Warhol. Blending art history, consumerism and popular culture whilst using different styles, eras, techniques, and motifs, he presents canvases filled with the iconography of animated characters and motifs from art history. Particularly inspired by movies and television, Speedy aims to re-intepret and the visual landscape that has become so commonplace.

After studying art at the Estienne School in Paris, he had a brief career as a graphic designer and art director before joining the art collective X-Moulinex in 1983.  During the early 1980’s he was trying to get representation in a Gallery in Paris, only to be told repeatedly to return once had shown his work at another Gallery. Determined to get out of this difficult cycle and to evolve as an artist in 1981 he decided to make paintings on the walls using simplified images on stencils he painted them around his town and then in other countries.  Over the past few decades Speedy Graphito has become known and revered for his exploration of commercialism and references to pop cultural images and icons.  His first solo exhibition in the U.S. was held at the Fabien Castanier Gallery in the fall of 2011, and the gallery has since remained the artist’s exclusive representation in North America. Most recently, he had retrospectives at Le Musée du Touquet-Paris-Plage, and at The Palais Du Tau in Reims, and has had a solo exhibition at Galerie Polaris in Paris.

In an interview during his 2013 exhibition at the Fabien Castanier Gallery he talks about his work, “We are bombarded by images all the time as propaganda, to influence us, I want to give some sort of distance in relation to all this imagery. This is why I hijack these icons, these brands and all these things, it is to diffuse the initial message, to tell another story, maybe to be a bit more poetic, more personal. Because what I like is that each person can appropriate the painting and see their own history. In my painting I like to express the liberty, the liberty to think, to appropriate things, and to recycle.”