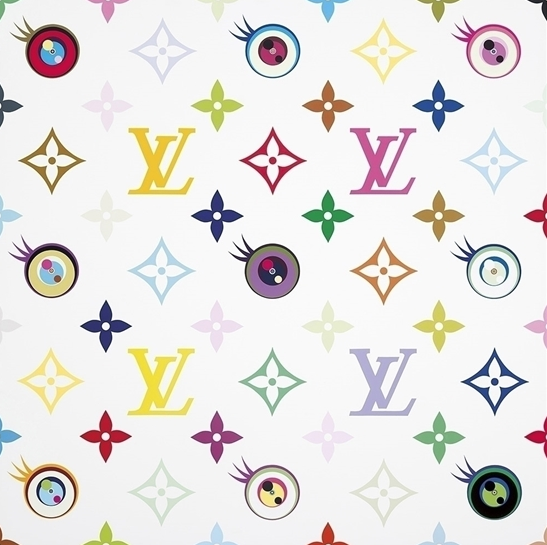 Takashi Murikami is an artist who draws on traditional Japanese and popular culture, creating paintings, films and sculptures, his work embodies, pop culture, history and fine art. Directly influenced by the Pop Art movement he appropriates commercial and popular images into high-quality pieces of fine art.

He is the founder of the postmodern art movement Superflat, which combines various aspects of Japanese visual culture, from ukiyo-e (traditional woodblock prints of the Edo period) to anime and kawaii (Japanese culture of cuteness). In 2001 Murakami curated a touring exhibition entitled Superflat, featuring works by artists whose techniques and mediums have a similar visual vernacular, and in doing this, Murakami advanced his Superflat theory of art.

In 2002, Murikami began a multiyear collaboration with Marc Jacobs at Louis Vuitton on the redesign of the Louis Vuitton (LV) monogram. Murakami then took the radical step of directly incorporating the Vuitton monograms and patterns into his paintings and sculptures. In this work Murikami presents his trademark anime-eyes motif interspersed with the LV monogram and classic four-pointed flowers. Infusing the fashion brand with his own artistic language, he is promoting the Pop Art philosophy that there is no difference between what he creates as a fine artist and his work as commercial artist with the Louis Vuitton brand –  it is all apart of the same practice.

Today Murikami’s work has been the subject of numerous exhibitions around the world, from the Mori Art Museum in Tokyo, to the Gagosian Gallery in London, the Guggenheim Museum in Bilbao, and the Versailles Palace.