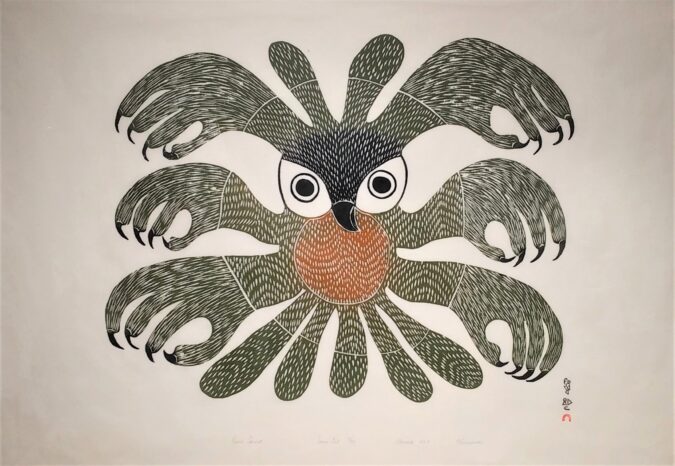 Raised in the traditional semi-nomadic lifestyle of the Inuit, Kenojouak Ashevak (1927- 2013) became the first female artist in the Cape Dorset Print Programme shortly after the establishment of the settlement. She went on to become one of Canada’s most celebrated graphic artists.

Birds are a key feature in her work, notably the snowy owl, or “ukpik” as the Inuit refer to it, which is seen as source of guidance and wisdom in Inuit culture. A key figure in Inuit oral history, many believe the owl to be a spirit guide who shepherds the deceased into the afterlife.

Ashevak returned to the owl over and over again throughout her career, producing more than 100 different prints depicting the bird of prey. One of her drawings, An Enchanted Owl (1960), was featured on a postage stamp in the 1970s to commemorate the centennial of the Northern Territories.

Ashevak travelled extensively to promote Inuit art throughout her lifetime. She became a member of the Royal Canadian Academy of Art in 1974 and was the recipient of numerous awards, including the Order of Canada

(Companion in 1982). A retrospective of her work was held at both the McMichael Canadian Art Collection Gallery in 1986 and at the National Gallery of Canada in 2002. Her work is held in the permanent collection of the Metropolitan Museum of Art in New York. She was awarded a Governor General’s Award in Visual and Media Arts in 2008 and in 2012 was appointed to the Order of Nunavut.