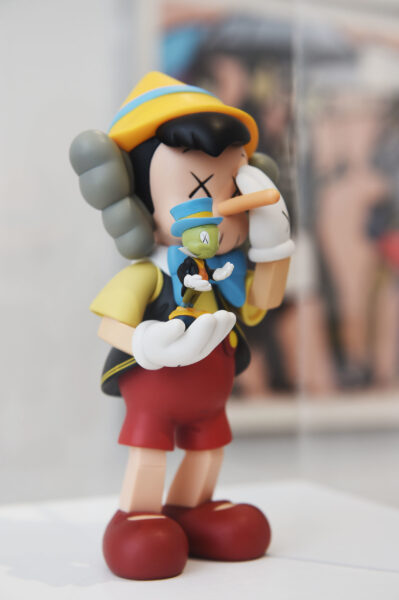 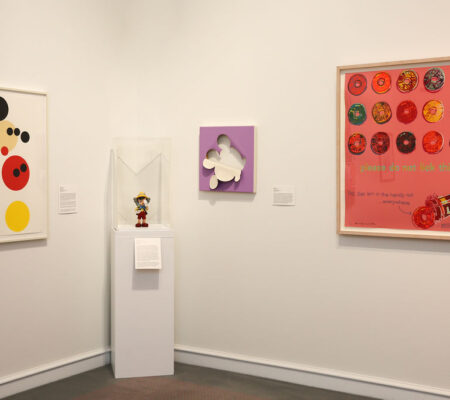 Brian Donnelly, better known as KAWS, graduated with a BFA in illustration from the School of Visual Arts in New York. After graduating from college in 1996, he worked for Disney as a freelance animator. While living in Jersey City, KAWS began his career as a street artist, taking advertisements from bus shelters, phone booth and billboards, and replacing them with his signature marks of crossed eyes and faces.

Kaws’s interest with pop culture began more directly in the late 1990’s and the 2000’s, when he used the iconography of the classic American cartoon The Simpsons. In his version, titled the Kimpsons, Kaws questioned how cartoon characters could become so engrained into people’s daily lives and how much of an impact a cartoon could have as opposed to politics. Seeing the success of this series, KAWS continued to juxtapose other famous characters like the Smurfs, Snoopy, Mickey Mouse and even Sponge Bob Square Pants.  In the years since, KAWS has rendered most of his signature characters in three dimensions, including Tweety, Snoopy, and Pinocchio.

In this piece KAWS presents an adaptation of the Disney version of Pinocchio with his companion Jiminy Cricket. Each character has received the signature KAWS stylings of gloved hands and an “X” for each eye.  Also, visible is the character’s long nose, which is commonly known to grow in size anytime the character tells a lie, posing the question- what has he lied about?

KAWS museum exhibitions include solo shows at the Pennsylvania Academy of Fine Arts, High Museum of Art, Modern Art Museum, and the Aldrich Contemporary Art Museum. Other international galleries include Galerie Perrotin and Honor Fraser Gallery. His work has been seen in Paris, London, Berlin, and Tokyo.