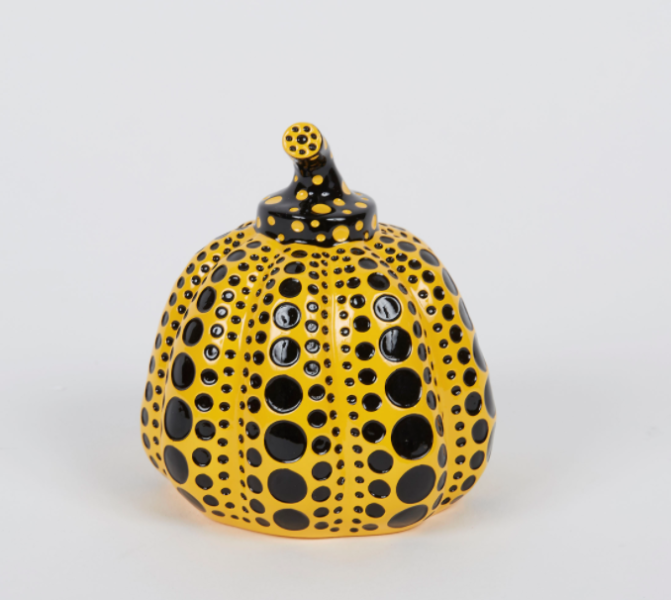 Pumpkins and polkadots are one of Kusama’s most recognized motifs, formally engrained in her practice in the 1980’s and 90’s, and continue on today. Kusama says she is drawn to the pumpkins form, because of its, “charming and winsome form, their generous unpretentiousness and solid spiritual base.” This miniature resin pumpkin is scaled down edition of the 1994 public art sculpture Yellow Pumpkin that Kusama created for Naoshima Island, Japan.

Kusama’s yellow pumpkins first attracted the artworlds attention when she presented the piece, Infinity Mirror Room in the 1993 Venice Biennale. The installation was a room filled with yellow and black polkadots pumpkins surrounded by mirrors, here she was exploring the physical and psychological boundaries of painting, with the seemingly endless repetition of marks, she created an almost hypnotic sensation for both the viewer and herself.  She says that the inspiration behind these dots was after a childhood psychiatric episode. “One day I was looking at the red flower patterns of the tablecloth on a table, and when I looked up I saw the same pattern covering the ceiling, the windows and the walls, and finally all over the room, my body and the universe,” she recalled “I felt as if I had begun to self-obliterate, to revolve in the infinity of endless time and the absoluteness of space.”

Kusama suffers from an obsessive – compulsive disorder, once telling an interviewer, “I don’t want to cure my mental problems, rather I want to utilise them as a generating force for my art.” In 1973 returned to Japan and in 1977 she checked herself in to the Seiwa Hospital for the Mentally ill, by night she sleeps at the hospital, by day she works obsessively in her studio where she is a highly functioning and very successful contemporary artist with a team of studio assistants.

In 2006, Kusama became the first Japanese woman to receive the Praemium Imperiale, one of Japan’s highest honours for internationally recognized artists.