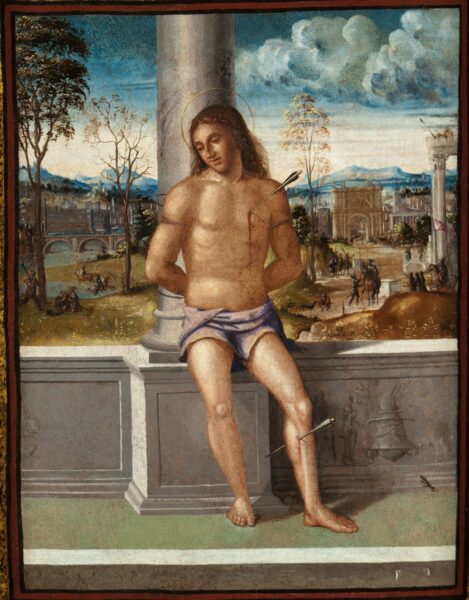 This painting of St Sebastian is by an unknown follower of Giovanni Antonio Bazzi (Italian, 1477-1549), who was one of the best-known painters in Siena, Italy of the early 16th century. It was originally used as a church or processional banner.

According to legend, Sebastian was a Christian who entered the Imperial Roman army in order to defend the confessors and martyrs of his day. During Emperor Diocletian’s persecution of the Christians, Sebastian secretly carried out acts of love and charity for his brethren in faith, and converted many of his fellow soldiers to Christianity.

When Sebastian’s faith was discovered, in AD 286, the emperor ordered his execution. Sebastian was tied to a tree and shot with arrows. Miraculously he survived this attack and returned to preach to Diocletian, denouncing him for his cruelty to Christians. The emperor then ordered that Sebastian be beaten to death, and this time he perished.