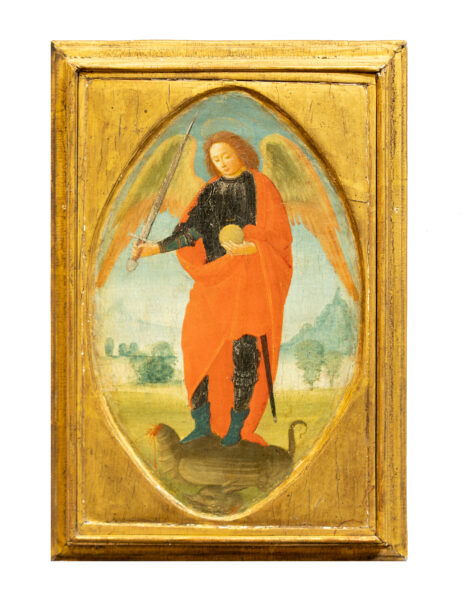 Bartolomeo di Giovanni was pupil, then assistant, to Domenico Ghirlandaio (c. 1449-1494), one of the leading master painters of late Quattrocento Florence. Bartolomeo assimilated the principal traits of Ghirlandaio’s style as his own. Like his master, he produced gentle, somewhat prosaic, archaizing paintings and had an eye for naturalistic detail. Bartolomeo’s works also demonstrate the influence of Sandro Botticelli (1445-1510), Filippo Lippi (c. 1406-1469) and Pietro Perugino (c. 1450-1523).

Bartolomeo was a substantial artist in his own time. He was commissioned to paint the predella panels for Ghirlandaio’s Adoration of the Magi (1488) in the Ospedale degli Innocenti (Hospital of the Innocents), an orphanage in Florence. He also assisted his master with a fresco painting for the walls of the Sistine Chapel in Rome.

The archangel St Michael is one of three angels mentioned by name in the scriptures. The most dramatic reference to the soldier-saint is found in the Book of Revelation (12:7-9): “Then war broke out in heaven. Michael and his angels waged war upon the dragon, […] and the great dragon was thrown down, that serpent of old called the devil and Satan.” Because of this victory, St Michael is revered in Roman Catholic tradition and liturgy as the protector of the church. During prayers after low mass, he is accordingly invoked to be “our safeguard against the wickedness and snares of the devil.”

In St Michael Slaying the Dragon, Bartolomeo depicts the archangel St Michael standing in a triumphant pose on the back of the dragon (Satan) that he has slain. He wears full body armour and carries a sword and the church orb. St Michael’s wings distinguish him as an angel, and prevent confusion with the other dragon-slayer, St George. The narrative is represented with beauty, humility and simplicity.