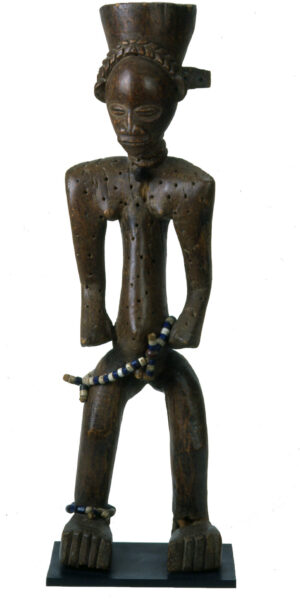 This figure may come from the western frontiers of Luba influence, where it probably served as a representation of an ancestral being that was consecrated with magical substances. The figure wears a cruciform coiffure that was common in the 19th and early 20th centuries, and a conical
iron pin is inserted into its chest. Such pins are miniature representations of a blacksmith’s anvil, and signify the secret of the Luba kingdom’s success, for Luba associate the making of a king with the process of transforming raw iron into useful weapons and tools. Luba say that such pins are inserted into sculptures in order to enclose the spirit safely within the receptacle.