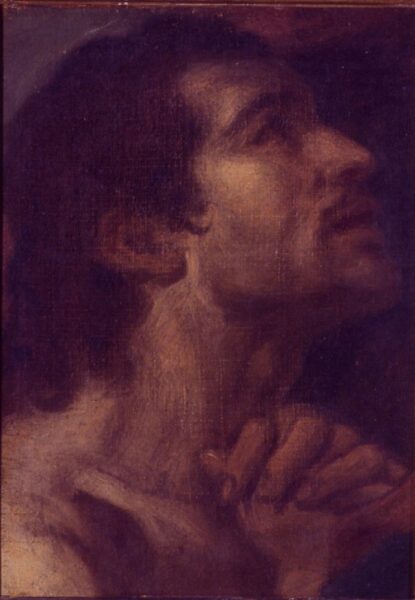 Bartolomé Esteban Murillo was acquainted with the Spanish Baroque artist Diego Velázquez (c. 1599-1660). Velázquez worked at the Spanish Royal Court in Madrid from 1623, where he was employed as court painter. When Murillo travelled to Madrid in 1648, Velázquez granted him access to all of the royal galleries, where he studied works by Titian, Veronese, Tintoretto, Rubens and Van Dyck, as well as numerous masterpieces by Velázquez himself. He was profoundly influenced by the work of these Baroque masters.

This painting is a life study for the head of The Prodigal Son, made in preparation for the finished work The Return of the Prodigal Son (1670-74, National Gallery of Art, Washington DC). In the 17th century, the story of the Prodigal Son (Luke 15:11-32) was commonly cited as a narrative that focused on the themes of repentance, forgiveness and resurrection. Having squandered his wealth with sinful living, the prodigal son repents and returns to his father’s household. He returns expecting to work, without expectations that his father will grant him privileges. However, moved to compassion, the father embraces his son, forgives him and welcomes him home. In this oil sketch, the penitent son is shown clenching his fists in a desperate plea for forgiveness.