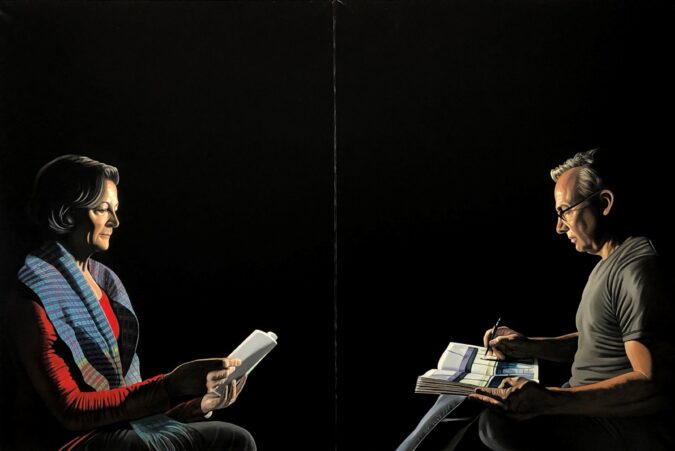 This painting depicts John Gardner and his wife Judith. A Founding Trustee of the Bermuda National Gallery, John Gardner was responsible for securing City Hall as a location for BNG and designed the original architectural and interior work on the gallery.

A founding partner of the award-winning architectural firm Cooper Gardner, he trained at the Rhode Island School of Design, where he also taught Advanced Architecture. An accomplished artist, he has exhibited the Bermuda Biennial five times (’00, ’02, ’08, ’10, ’14). His mixed media work focuses on drawing, painting and conceptual installations.
Judith Vance Gardener received a BFA in Textiles from the Rhode Island School of Design and worked as a fabric designer in New York City before moving to Bermuda in 1985. Her work, which is united in an exploration of colour and pattern, ranges from woven fabrics to large collages of hand-made paper, to paintings in gouache.