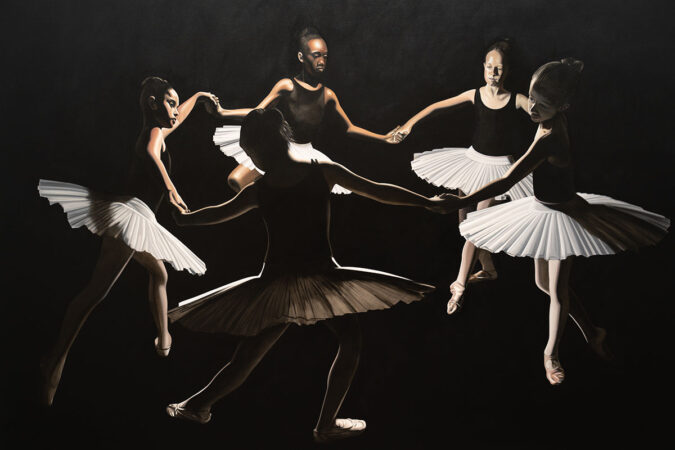 The portraits in From Darkness to Light are inexorably linked to this work, the show’s centerpiece The Dance (after Matisse). Inspired by a Matisse painting of the same name, the work, which took over 4 years to complete, portrays five circulating dancers who, for Ward, are “an expression of the dance of life. The painting is an existential expression of humanity within the darkness of the universe.”

The painting’s complexity centres around the subtle shifts in scale of each figure in relation to the next and their overall visual harmony. “To create depth, each figure has been pushed away, or pulled towards, the picture plane by careful manipulation of scale.” he says. “The two flanking figures at right and left most clearly show the difference in scale as one figure leans away while the other leans towards the picture plane.”

Wards explains: “The supplementary figures at the rear link together, whilst being interrupted by the figure in ‘repoussoir’ at the front. The use of ‘repoussoir’, used most famously by Rembrandt in The Night Watch, is a device that reverses the law of light and dark on the picture plane. Typically, light advances and dark recedes, but the use of this device allows dark to advance before light.”