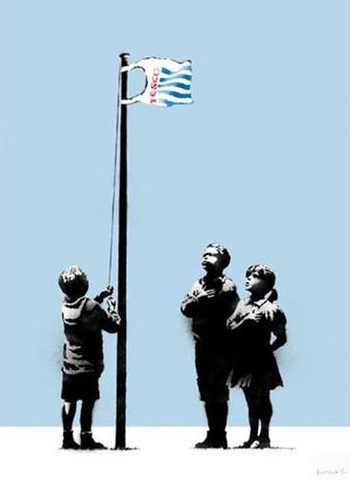 Masked behind a concealed Identity, the artist known as Banksy made it on the 2010 Time magazine List of the world’s 100 most influential people, he found himself listed beside, Barack Obama, Lady Gaga, and Steve Jobs.  When asked for a portrait by Time Magazine he sent in a photograph of himself with a paper bag on his head.

Very little is known about Banksy himself, as he refuses to be interviewed and keeps his identity carefully maintained.  Banksy has become one of the world’s greatest street artists partly by creating an urgency to understand his character.

Banksy began to graffiti in the 1980’s, during this time he began to stencil and realized the authority stenciling had, he told his friend, author Tristan Manco: “As soon as I cut my first stencil I could feel the power there. I also like the political edge. All graffiti is low-level dissent, but stencils have an extra history. They’ve been used to start revolutions and to stop wars.”

Banksy often uses multi-layered stencils combined with spray-paint. He also includes anything found in the streets like street signs and other objects to convey his message by crafting street art installations. His artwork is often satirical and combines dark humor with graffiti and also spread messages across art, philosophy, and politics.

In the early 2000’s Banksy’s silkscreen prints and stencil paintings were selling at art auctions such as Sotherby’s and Bonhams of London. These successful sales officially broke him into the commercial business. In 2010 Banksy became a successful author and filmmaker for the film “Exit Through the Gift Shop.”

This artwork, entitled Very Little Helps, is also known as “Tesco Flag”, it is a parody of Tesco Supermarket’s advertising slogan “Every Little Helps”. Originally, the street mural was located on the side of a chemist shop on Essex Road, Islington, the print was released as a limited edition in 2008.

First spray stencilled on a wall in 2008 Very Little Helps has become one of the most famous murals in street art. It is located on the Essex Road in North London, and although attempts have been made to preserve it the piece by covering it in Perspex, it has still been ‘vandalised’ several times. Later in 2008, Banksy released “Very Little Helps”. As a Banksy art, this piece is well-known its relatively low edition size contributes to its desirability.

In the artwork, which has a block colour background of baby blue, three children stand around a flagpole, as one child raises the flag, the other two look on, hands on their hearts in a bizarre show of patriotism to the “flag”. The flag in this scenario though is, in fact, a plastic carrier bag from UK supermarket chain Tesco. Tesco are known for their monolithic superstores, which are thought to be responsible for the decimation of independent traders across the UK. Banksy’s critical take on popular culture and modern-day commercialism.