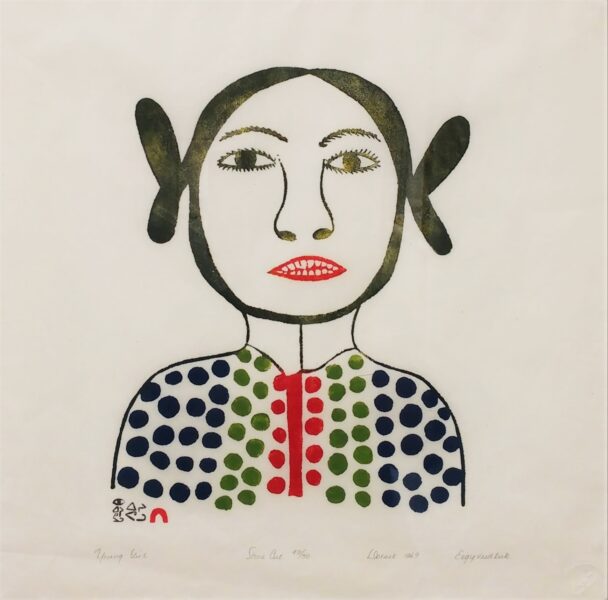 Although not initially a resident, Eegyvudluk Ragee was one of the first artists to take up drawing at Cape Dorset in 1959, having gained access to pencil and paper by trading for it. She developed her artistic practice whilst continuing to live in the Inuit’s traditional, semi-nomadic way of life. It was not until 1967 that she permanently moved to the Cape Dorset settlement. By the mid 1960’s Ragee’s work had matured into a spare, strikingly modern style and she began experimenting with wax crayons and colour felt tip pens on paper, going on to explore acrylic washes in the 1970s.

The Cape Dorset annual print portfolio is an imprint which continues to this day through Dorset Fine Arts, a division dedicated to distributing Inuit artworks to galleries around the world, including the permanent collections of museums across Canada and the United States. James Houston (1921-2005) is widely credited with revolutionizing Inuit art and went on to become a fellow at the Royal Society of Art and an Officer of the Order of Canada.

The majority of the Inuit population at Cape Dorset today are working artists, many of which are the descendants of the artists featured in this exhibition. The third generation of Inuit artists continues to uphold the legacy of their ancestors, expanding the scope of their work to reflect both the modern technologies that they have adopted (such

as snow mobiles and skidoos) and the issues affecting their community today, which include alcohol abuse and climate change.

The place of Inuit art in the contemporary landscape was cemented in 2017 by the inclusion of 10 drawings by Kananginak Pootoogook (1935-2010), a key figure at Cape Dorset, in the Venice Biennale, the most prestigious international contemporary art exhibition in the world today.